I’ve been writing songs for about 9 years now. I’ve been recording songs for about 7 years now. The songs have been passable for about 6 years now. I’ve dared to record vocals for about 4 years now (not that any of those recordings have seen the light of day). This was, for quite a while, my main creative outlets and I’d built up quite a body of work, if admittedly unreleased. But then another creative outlet opened itself up a couple of years ago, and I only have a limited mental budget for this kind of thing in my life, so the songs fell by the wayside somewhat. And then James Acaster came along.

James Acaster is possibly my favourite comedian, a very nice person, and unrelatedly really knows his dessert places in New York. I was very excited for the publication of his second book, Perfect Sound Whatever, last year, and devoured it in a couple of days on release. The book is in part an examination of music released in 2016 and in part an examination of a breakdown he went through in 2017. It is an excellent piece of writing on both counts, and one which contains the following passage: 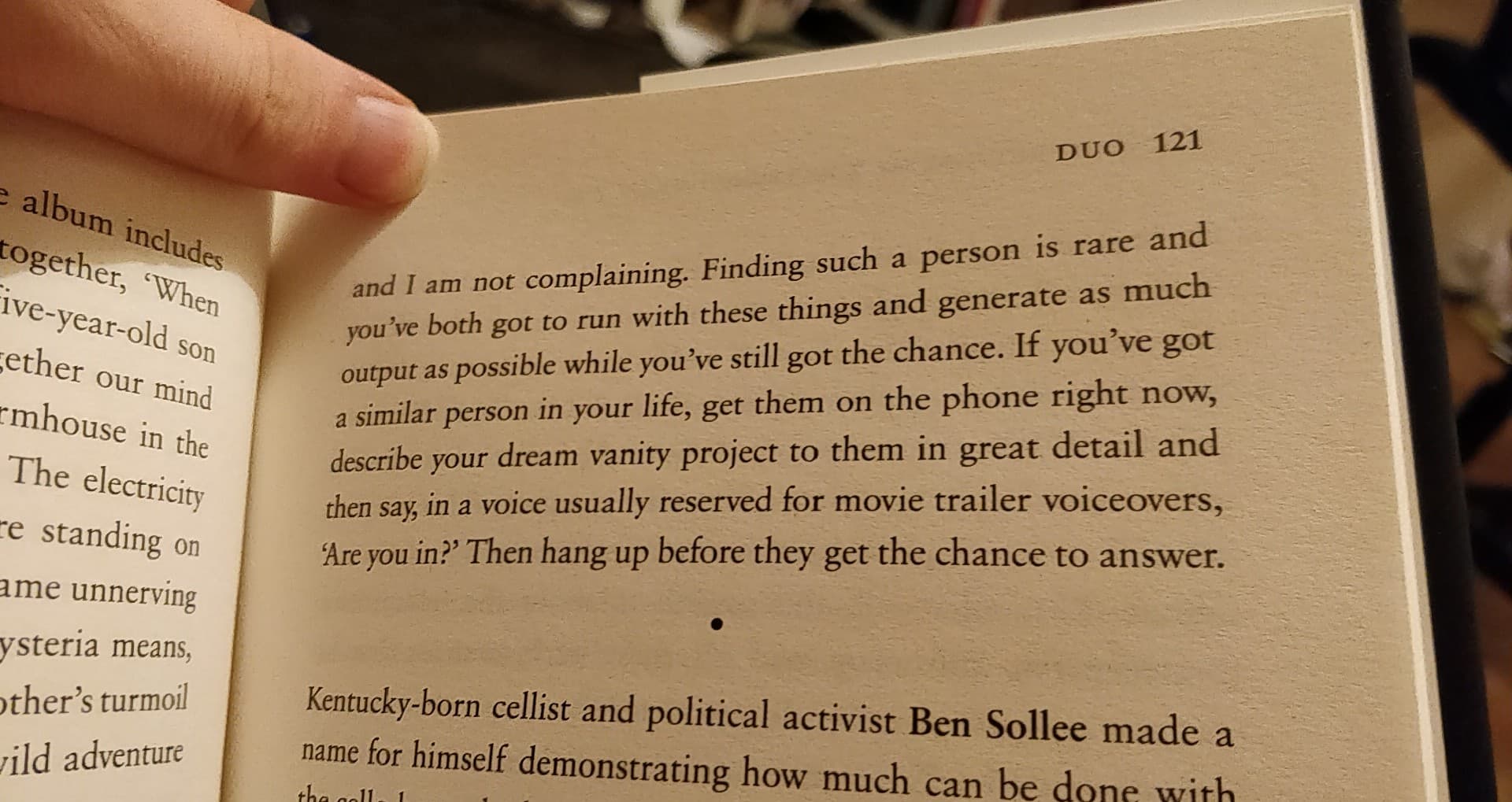 I immediately sent this photo on reading it to my friend and former flatmate Phoebe, whom I had at one point been in what could loosely be termed as a “band” with. In university we had played three open mic nights in halls at uni - two Radiohead songs and Fairytale of New York for Christmas - and recorded ourselves doing covers of such esteemed songs as We Are Golden by Mika and, of course, Yeah by Usher. We named ourselves Bastions of Integrity - what else would you call a band that almost exclusively played Radiohead covers at open mic nights? - and kept it alive through stupid fake names of albums and songs and an entire history of the band. Despite never actually writing a song.

But reading that passage in James’s book spurred something in me. I followed his advice, and asked Phoebe if we were going to make a Bastions of Integrity album. Of course we were, came the response. Our initial steps were trepidatious, a certain uncertainty in sharing lyrics and musical ideas, a quite personal thing, but this has ultimately been good for me, at least - I can’t speak for Phoebe but I imagine she feels somewhat the same.

The plan was to make an album and then release it. We started on this, with a number of songs in the works, until we reached mid-December and decided that the only sensible thing to do was to release a Christmas song. Our most collaborative effort to date, Wherever You Are At Christmas was released into the world on the 23rd of December, literally the morning it was finished. 20 bucks to Distrokid later and somehow we existed on Spotify, and iTunes, and Apple Music, and even Tidal - Tidal! For all twelve remaining users. I still listen to it and find flaws, but honestly I’m incredibly proud of that song and the fact that I got over a lot of insecurities and actually put it out there.

So what remains for 2020? I think the plan has shifted to a series of EPs rather than a single album - having paid for the Distrokid subscription, we might as well make the most of it, and forcing ourselves to actually finish 4 or 5 songs at a time is probably much better for our discipline. In the same way that I don’t imagine anyone is actually reading this, I don’t imagine anyone is ever going to actually listen to the music we put out (this is why I don’t look at the Bandcamp stats), but I think there’s something to be said about the act of putting it out there. So with any luck, this time next year, Bastions of Integrity will have released 12 or so more songs. Scary to think about. Let’s check back in then, yeah? Yeah.