In 2021, I visited 69 unique restaurants (make your own jokes, I’m off the clock). Which would already be a lot, even if you didn’t account for a) the four odd months last year where restaurants were shut, and b) that I’ve been to some of them multiple times. Frankly, I’m probably paid too much money to be able to afford this habit, but I suppose it’s better than NFTs or designer trainers or heroin. In that order.

It was incredibly difficult narrowing this down to a top 10, but the medium of Instagram and the modern condition of constant ranking and comparison insists. So here we are. They are honestly in no particular order. I’ve cheated at least twice. There will probably be some honourable mentions later on. I cannot claim to be a food critic. I cannot tell you these are the 10 best restaurants you could go to in this city (although sometimes I will do so anyway). I truly believe that you cannot separate the context of experiencing something from the thing itself - the time, the place, the weather, the mood, or perhaps most importantly the people you’re with - these all have as much impact on your enjoyment of the food itself. These are merely the ten that stand out to me as some of my favourite restaurant experiences this year, for any and all of those factors. 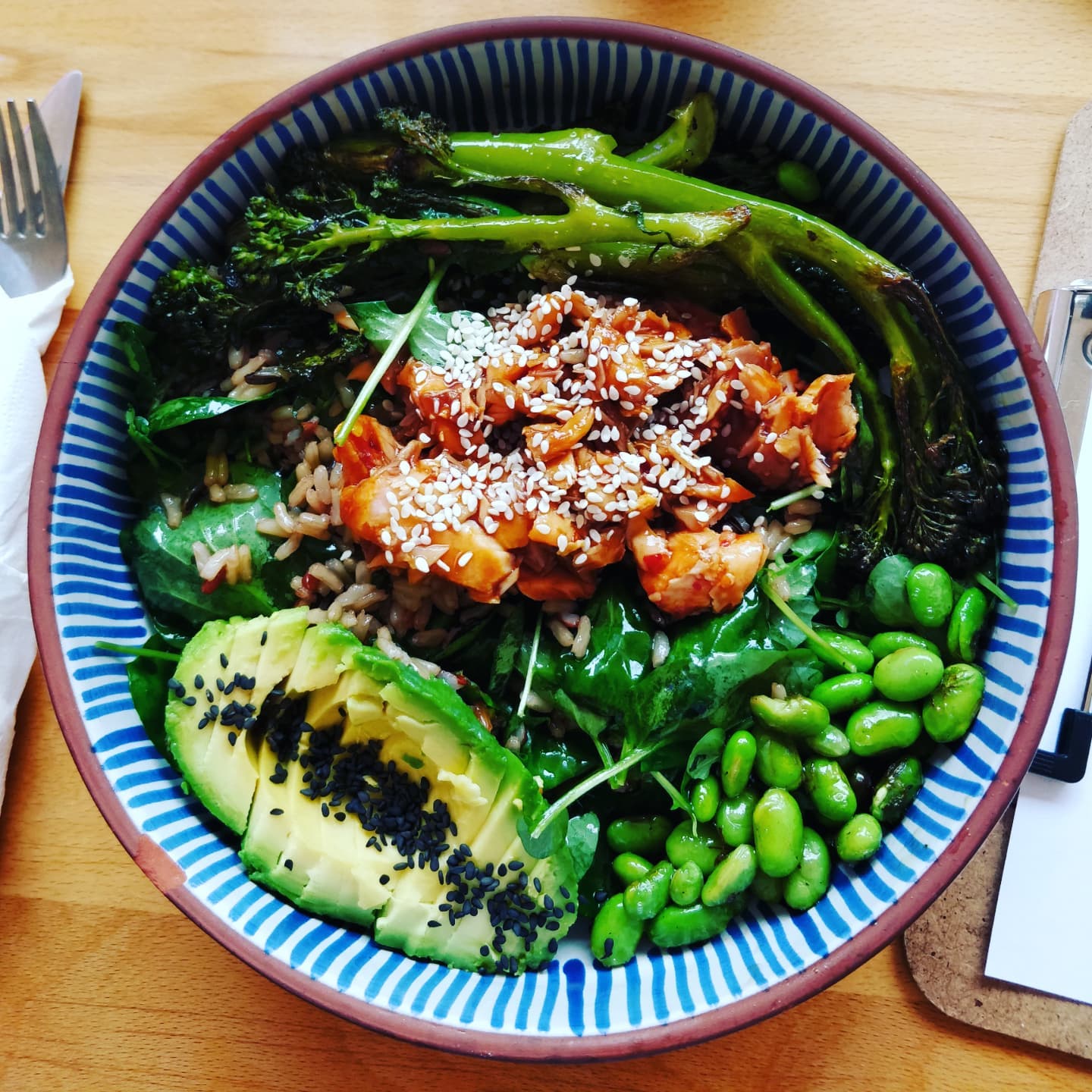 I first went to Flour House on the second day it was open, if only because I’d been asked to provide a vicarious experience, and honestly I don’t think a week has gone by since when I haven’t been back. It is without a doubt my new favourite place to sit in Bristol. I have brought almost everyone I know who likes food here for brunch or coffee or something at this point. I’m writing this entry sat there right now. Spotlighted here is one of the recent lunch options, a Teriyaki salmon with wild brown rice, sesame cooked tenderstem, and avocado. It is delicious, but so is - and I cannot stress this enough - everything I’ve ever had here. Every cake, brownie, brunch, sandwich, mince pie, milkshake, everything. It’s the friendliest place you can find (where else would give you a little house plant as a thank you for being a regular?), and I’m even starting a stand up gig here in February. I almost don’t want you to go to Flour House, so I can keep it to myself. But that wouldn’t be fair. You’d be missing out. 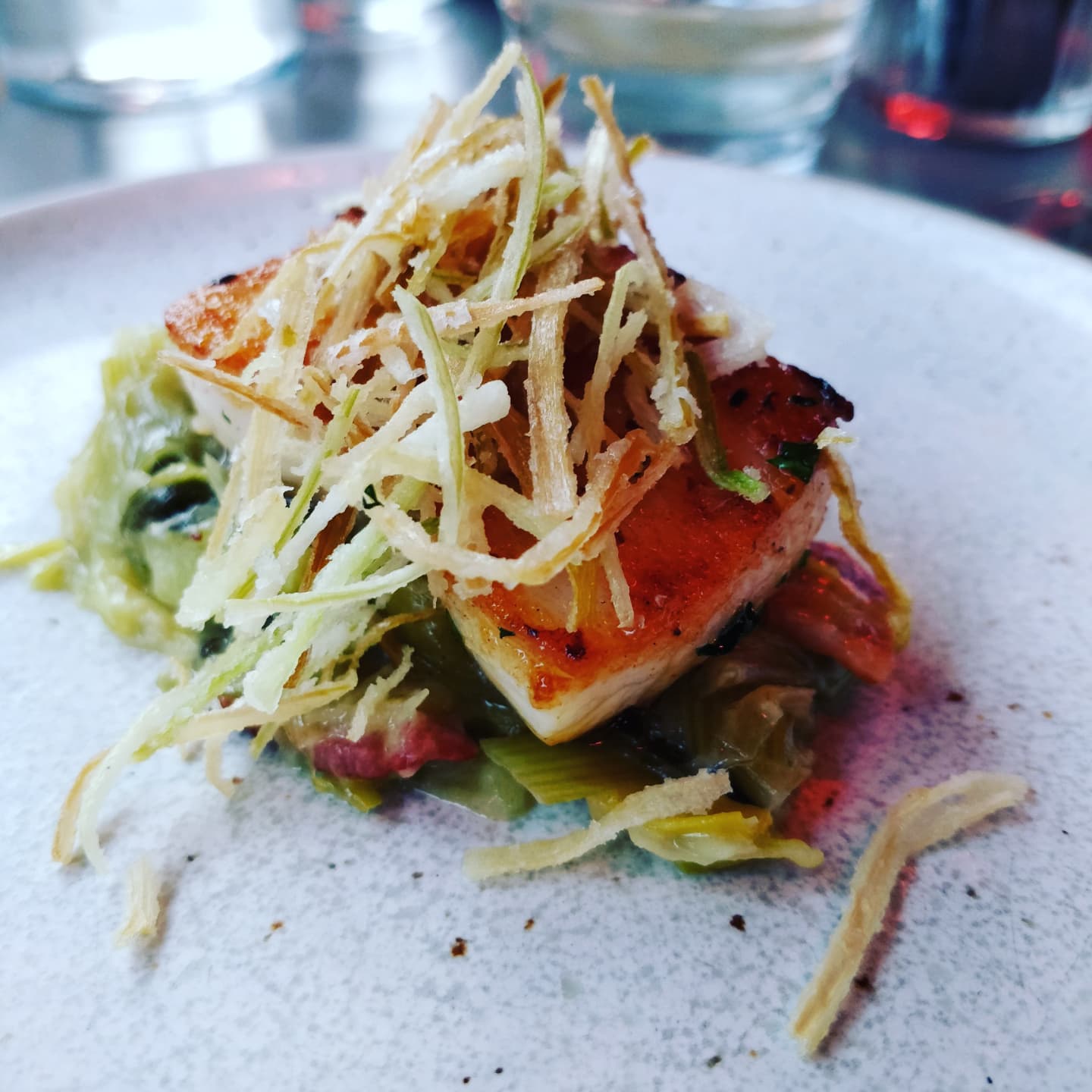 Obviously BOX-E is on this list. I’ve been five or six times this year. Of course I have. I tell everyone to go, and often they listen. I have many happy memories of my times at BOX-E this year, from an exceptional New Year’s Eve lunch only yesterday, to a Riesling tasting evening on the terrace (Tess and I sharing a fondness for the grape); from hungover lunches with Zac (I blame the interns you’ll meet below) to birthday lunches where god love them they managed to get a birthday candle to stay upright in a bowl of rice pudding. But my favourite memory of it from this year is my first trip back this year, and one of my first restaurant visits of the year, all the way in May. Out on a not too chilly terrace, just remembering the experience of eating delicious food in a proper setting, with much wine - there is no other place I’d rather have done it. These are some scallops, with crispy fried leeks, from that visit. 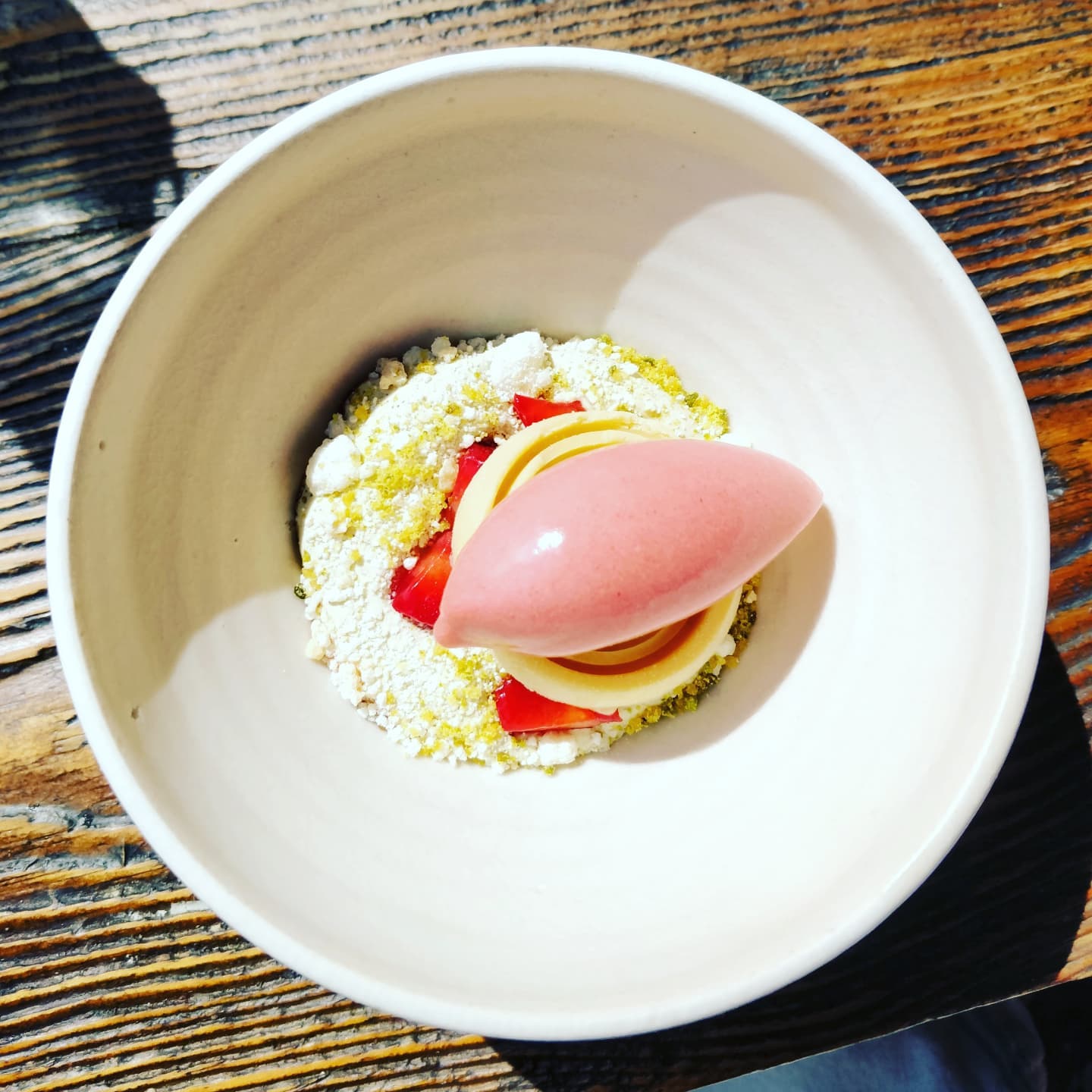 I went on a bit of a mission this year to expand the number of places I’ve eaten in Bristol, with obviously a preference for the nicer places - it’s not that I’m a food snob, lord knows that I’m partial to a cheap pizza or a takeaway, perhaps too partial, but a few years ago I realised how much I enjoyed good food, and here we are. Adelina Yard had long been on my list of places to try, and sometimes in the summer you just need an excuse to take an afternoon off work and treat yourself. An excitingly varied tasting menu with impeccably matched wines, including a lovely additional set of snacks and petit fours afterwards. I told my current manager to go here for her anniversary (or her husband’s birthday, one of the two), and I think that worked. 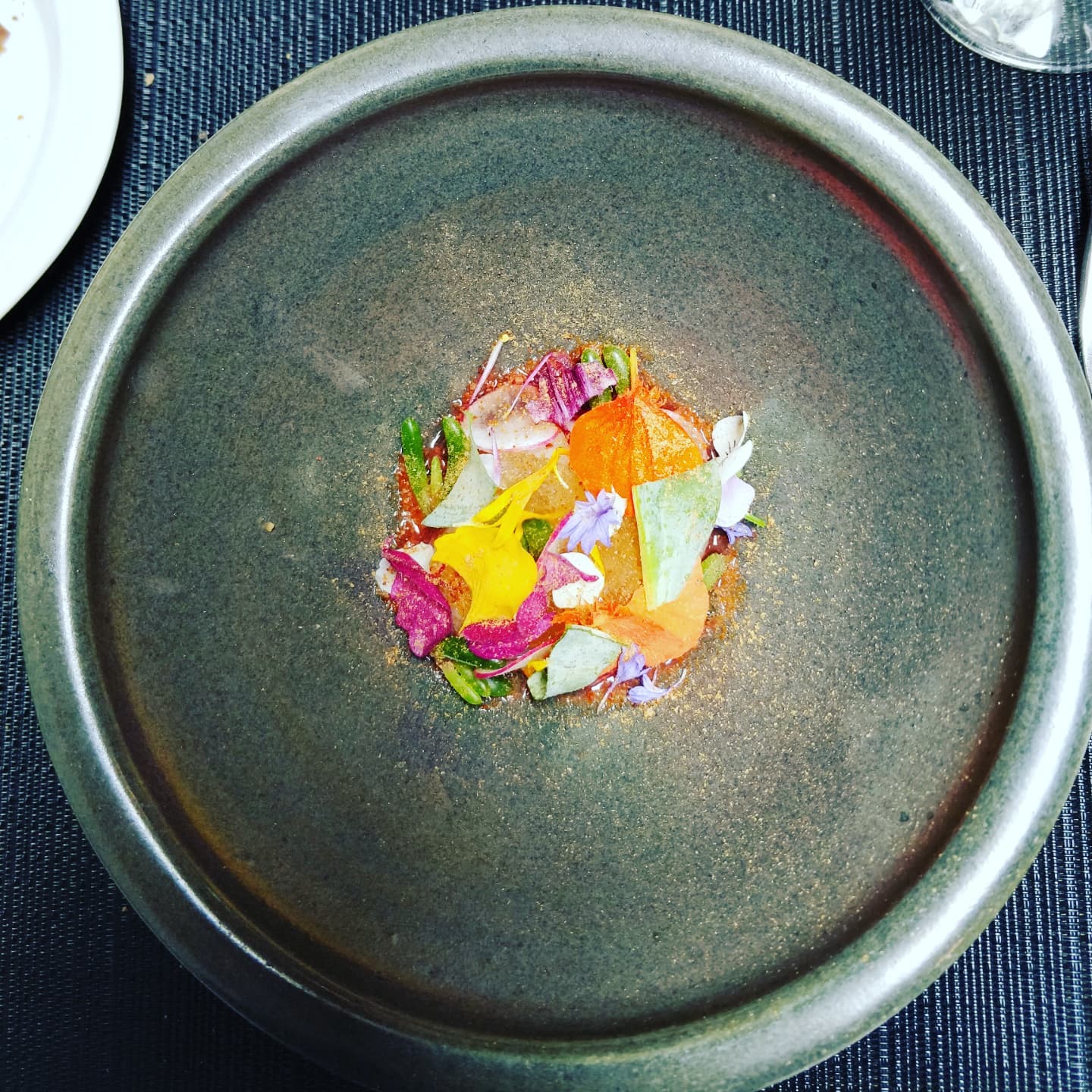 There are three Michelin starred restaurants in Bristol. Bulrush was the first one I made it to, all the way back in the heady days of 2019. Since then, I’ve been to all three, but we’ll get back to that later. Bulrush was a restaurant I worried a lot about (comparatively speaking) during lockdown - how does a restaurant with only a 10 course tasting menu survive that? I was scared to Google it to find out, dreading the worst. But sat in BOX-E in that first trip back, I plucked up the courage and was delighted to see it was still going. I immediately booked it. One hasty last minute rearrangement such that I could go to a barbecue at my boss’s place near the Forest of Dean later, there I was again, this time sat in the cosy upstairs area. A fascinating set of flavour combinations (spruce ice cream, who knew?), all very well matched. A treat, for sure. 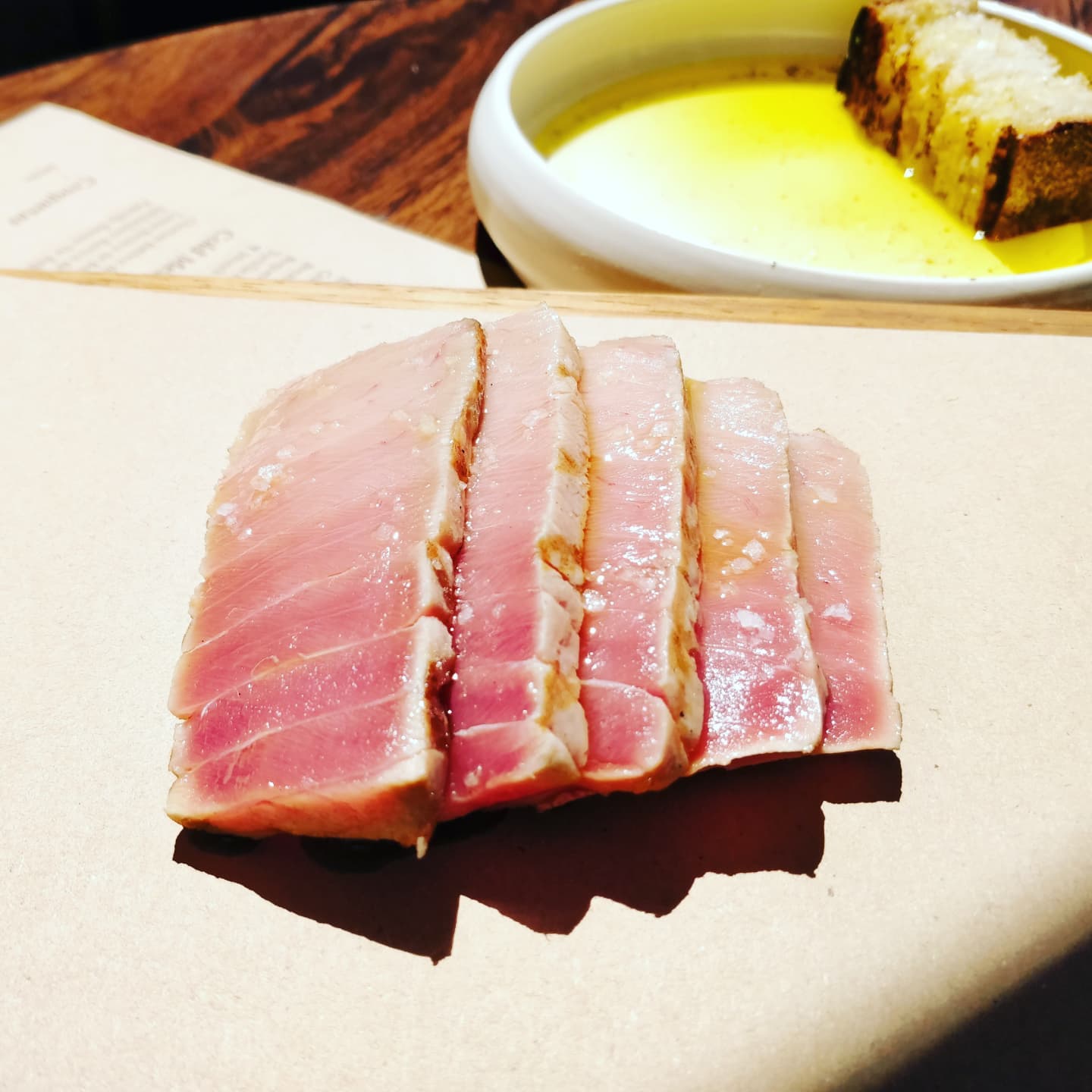 There are three Michelin starred restaurants in Bristol. Paco Tapas was the last one I made it to. (The missing one, in the middle, is Casamia, a definite highlight of 2020 but that is sadly out of scope for this discussion). Another sunny afternoon off work in the summer, with nothing to do. In contrast to most of the previous entries, Paco Tapas doesn’t really offer a tasting menu by default, so it was up to us to decide what we wanted to order. The only sensible option was to merely order pretty much everything on the menu and hope for the best. Plus some cocktails. Then some wine. Then some (duh) Pedro Ximinez. I still think about the tuna I had here, very often. 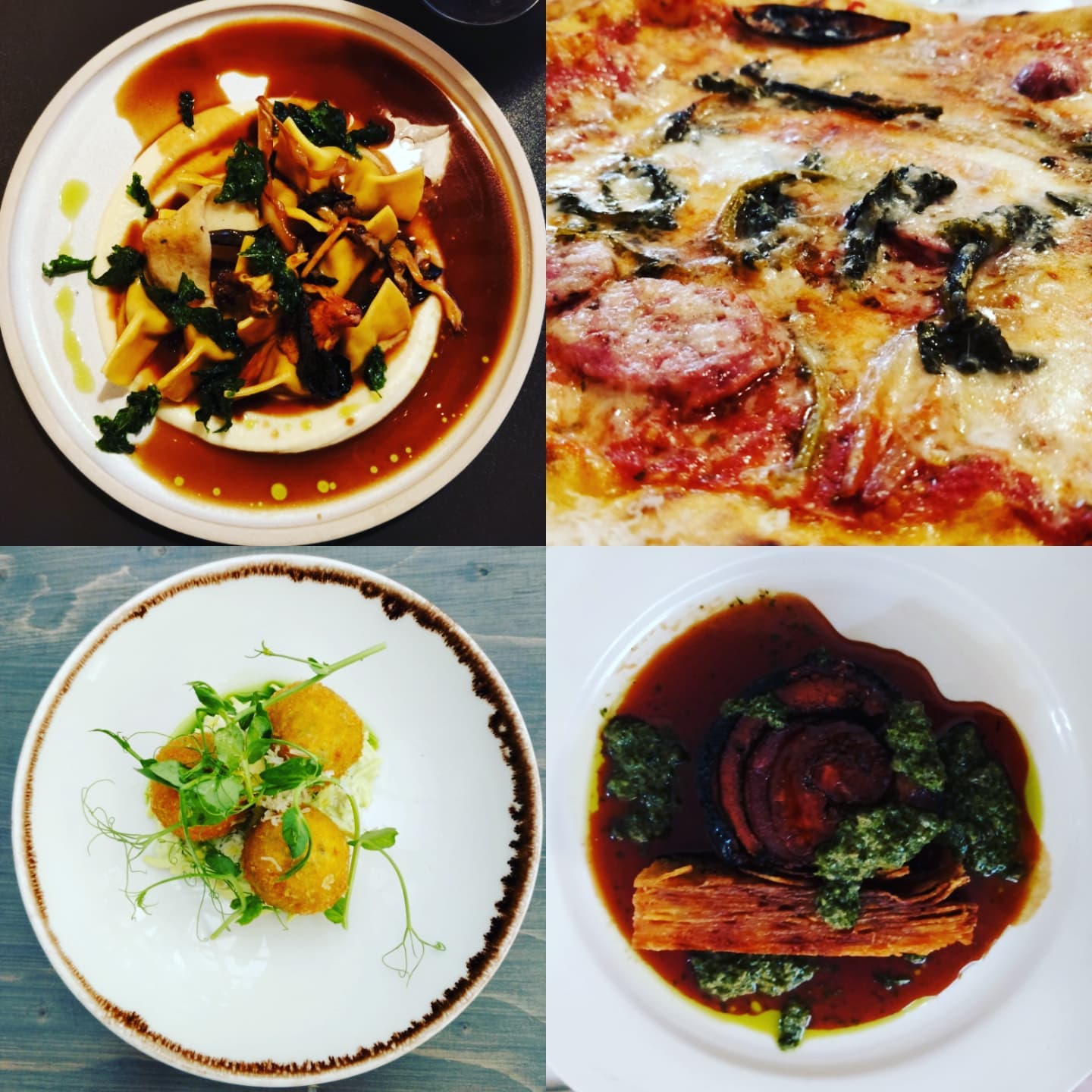 I grant you that I’m cheating here, but otherwise the Bianchi Group restaurants would have taken up four spots on this list and that just didn’t seem fair. But I cannot separate them. Let’s not spend time counting how many times I went to these collectively this year. Let us instead simply bask in the sumptuous glory of pasta and other Italian cuisines. From the infamous carbonara at Loco to the focaccia graciously received at the end of a meal at Ripiena to mop up the sauce; from chicken milanese to some of the best pizza (and, I would add, some of the best chocolate milkshakes) in Bristol. The arancini at all of them. And the fact that I’m apparently enough of a regular to warrant a glass of fizz when I turn up. A Bristol staple that I was delighted to keep in my calendar regularly this year. 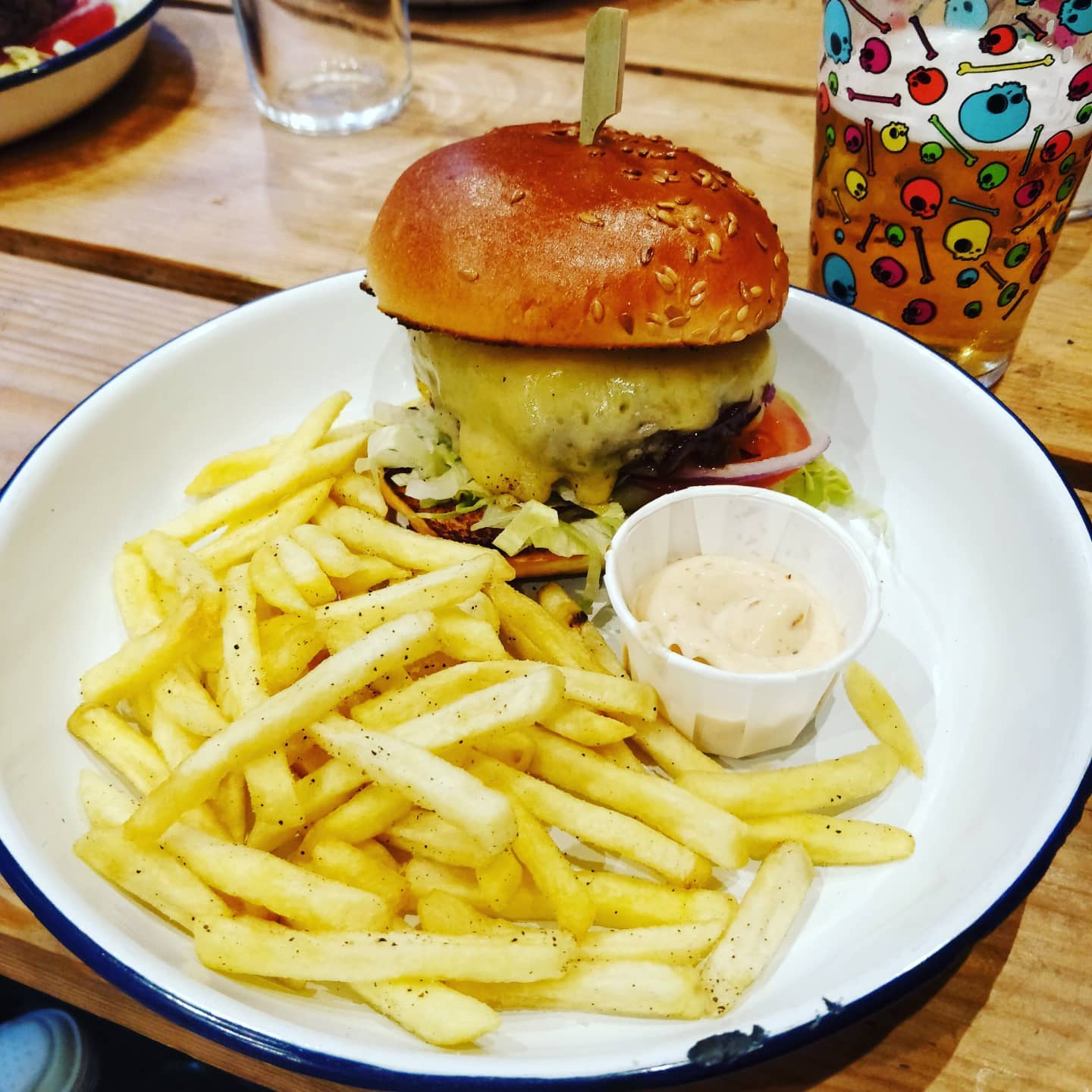 The Hobgoblin does the best burgers in Bristol. I will not be accepting counterarguments on this. I assure you I have done the research. Don’t at me. I hadn’t been since before lockdown in March 2020. I was worried it wouldn’t be the same. But in October, for one of my many food-related birthday celebrations, I took all of my interns out for burgers there and god was I glad to not be wrong. This was the first time I think I’d seen all of them in person at once. I’d made my signature chocolate cake for the occasion, and they surprised me with a very sweet present. The rest of the evening was spent drinking copious amounts and boy did I feel it the next day. But it was 100% worth it, and would have been 100% worse without a Hobgoblin cheeseburger in me to start with. 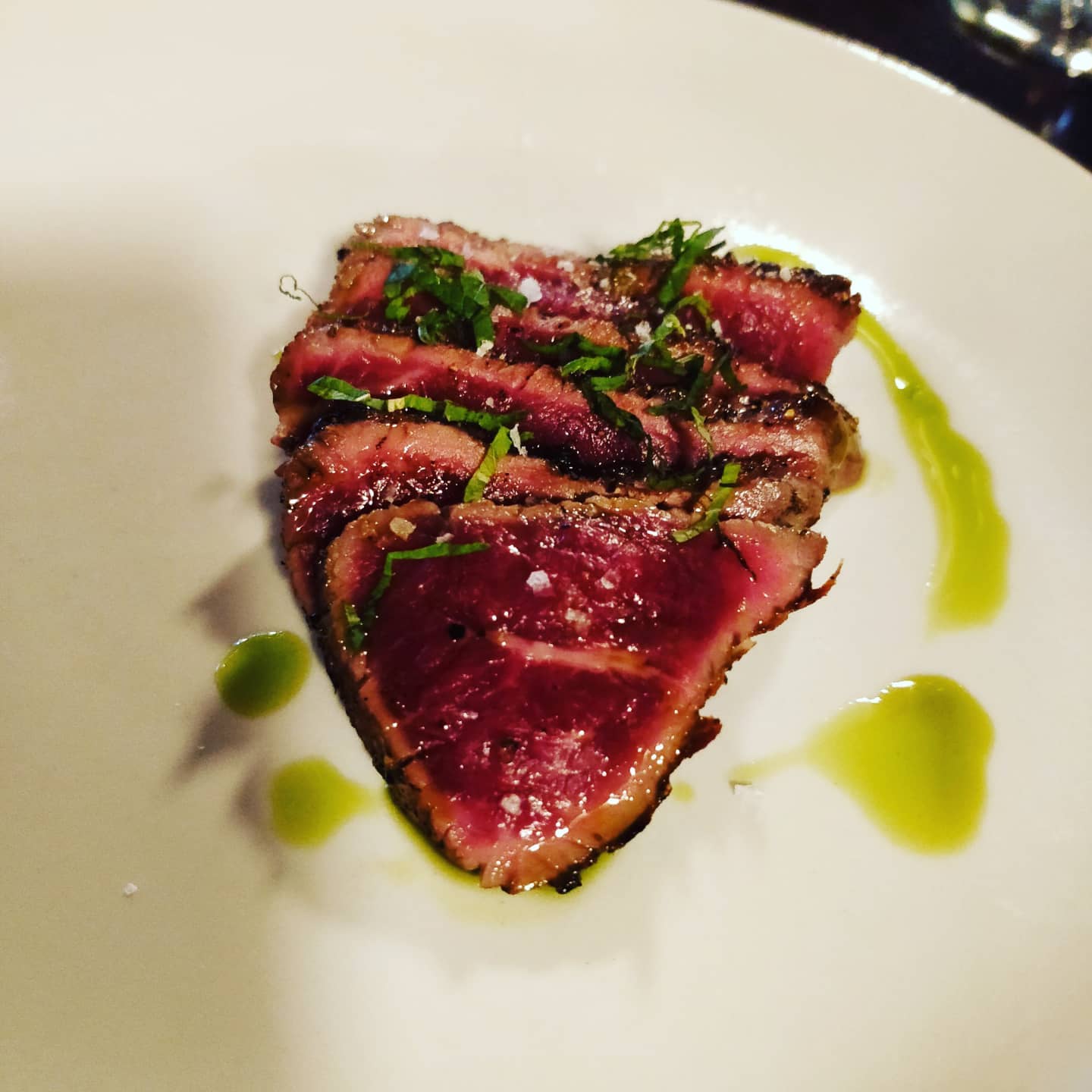 There was lots of other food around my birthday (Six By Nico with Alex and Andy, Clifton Sausage for a CDS mentoring dinner, Ahh Toots for afternoon tea with Soph, the aforementioned BOX-E birthday lunch), but this was the day itself (although even then I made it to Flour House for brunch with Thomas too). Having no means of ever getting to the original Pony And Trap in Chew Magna, the team opening a bistro in Bedminster made my life much easier. This was absolutely a birthday meal to remember, dutifully joined by Ben. Milk Stout tiramisu, a beautiful piece of Cull Yaw, and rainbow trout. Very nice wine. And a nice early evening of it too. 28 years old. 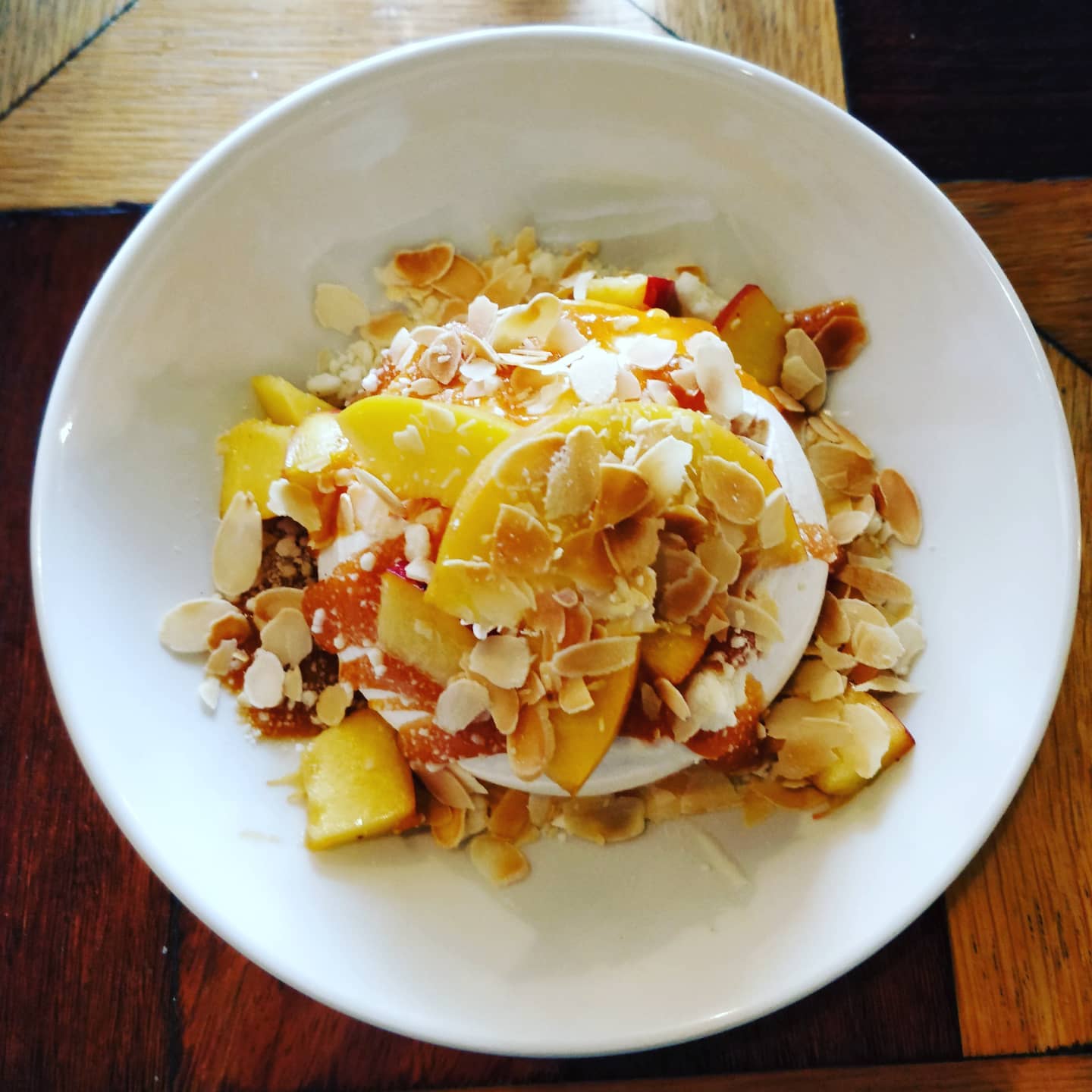 I’m not much of a sharer, when it comes to food, as Soph disastrously found out when we ordered a Chinese takeaway about three weeks before I moved in with her. That was difficult. But times have changed, even when you’d assume Covid would have pushed me further towards keeping to myself. Phoebe came down to visit for the first time in lord knows how long, and what an excuse to try Root, yet another restaurant in the Cargo shipping containers. Following the Paco Tapas vibe, we ordered pretty much most of the menu and hoped for the best. We were not wrong. Predominantly vegetarian or fish-based dishes, this very much demonstrates that meat (delicious though it is) is never a requirement for excellent dining. Eat everything and avoid disappointment. 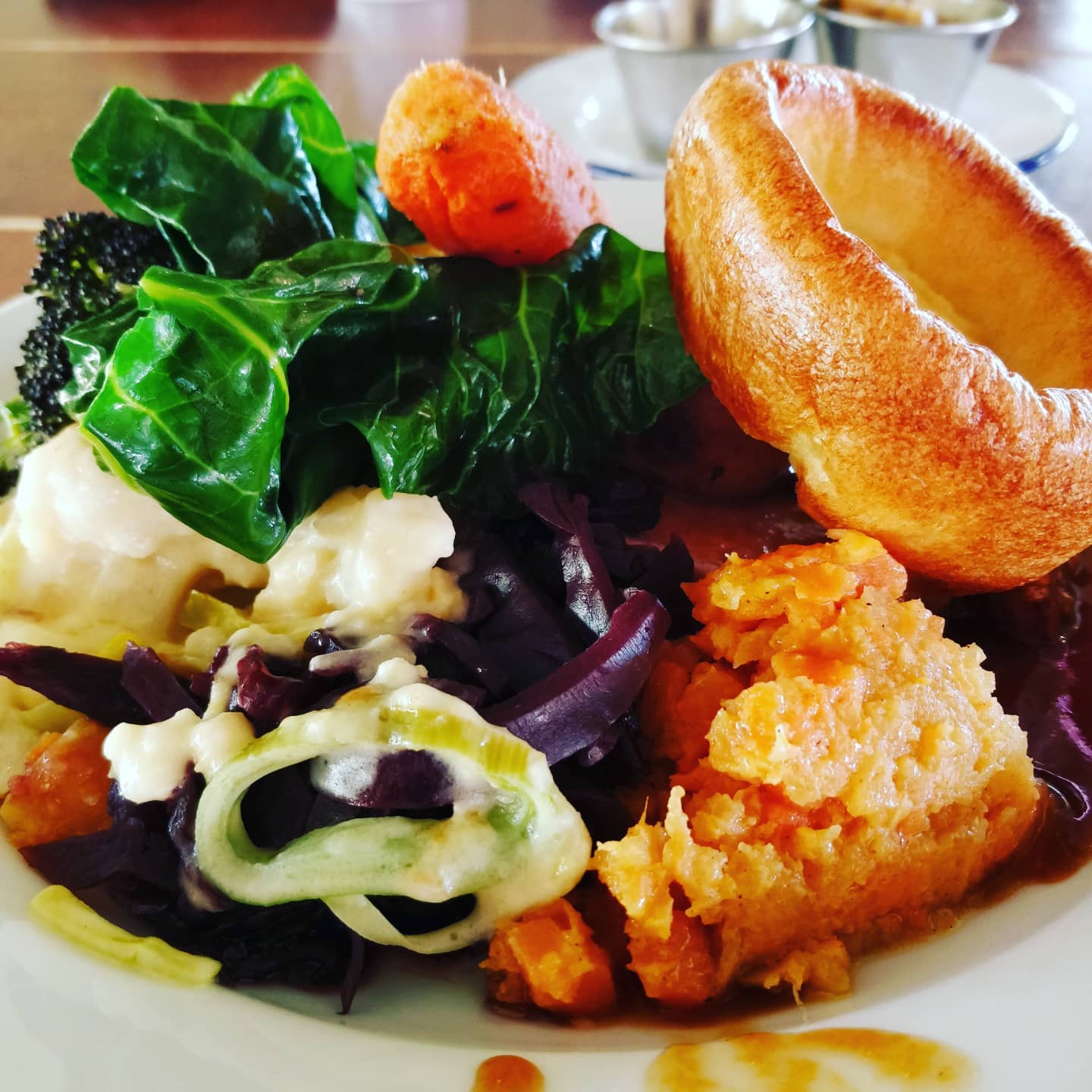 I went to Breaking Bread in a few different guises this year (from a non-culinary point of view, I also went to perform at the comedy night a few times, which was always a lot of fun, not least in that they also gave us food). There was my first restaurant trip back of the year, a Sunday roast at the Pipe and Lovers section which was delicious if not in my emotionally best place (thank god for red wine); there was a further trip to Pipe And Lovers with Zac and Martha, to enjoy a burger (not as good as The Hobgoblin, but you knew that, it was unfair to expect it); and finally a trip with Maddie and Chris to Home Grown, the fancier element of the whole affair. I’ve never eaten tomatoes as nice. And that’s saying something. I don’t know whether it will be back next year, but I hope it outlives Covid - a food tent on the Downs feels right for Bristol.

« Trying to be funny and stuck in a room